This is a write up for one of the FCSC (French Cyber Security Challenge) reverse engineering challenges.

It was the first time I had to deal with virtualized code, so my solution is far from being the best. Surely there were much quicker ways, but mine did get the job done. This write-up is essentially meant for beginners in the domain of obfuscated code reverse engineering.

This happens to be a keygen type of challenge, here are the rules (in French): 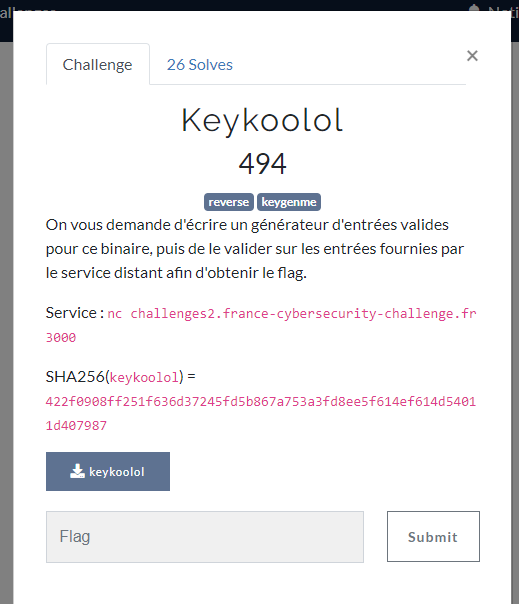 Basically, it is saying that you have to download a binary, that will take inputs, and much like a licensed software, will verify those inputs against each other. This is meant to mimic the way proprietary software verifies license keys.

The goal is the create a keygen: a script that will generate valid inputs to feed to the license verification algorithm. Of course, with only an offline validation, the challenge becomes trivial (simple patch and let’s goo), but you have to validate your inputs against an online version of the same binary. There are two inputs: a username, and a serial.

Executing it will yield:

In those types of challenges, I would advise you to manually fuzz inputs. By sending special characters and strings with an invalid length, you might get an interesting error message. Keep in mind that the first step is the understand what the software is expecting as inputs.

But it’s not going to help here :) (would be too easy)

Let’s go roughly through the steps we will have to follow:

So text contains our code, but rodata and bss are quite large. 1216 bytes for rodata and 10Ko for bss ? Something smells fishy. As a reminder, bss is meant for uninitialized global variables. It often contains stuff like session encryption keys and pretty much any runtime data that requires a globally shared pointer.

What is in rodata ?

As expected, we can see the strings used by the binary to indicate us the validity of the entry. But what is after offset 0x000000c0 ? The data seems jibberish and not interpretable, but is it random ? 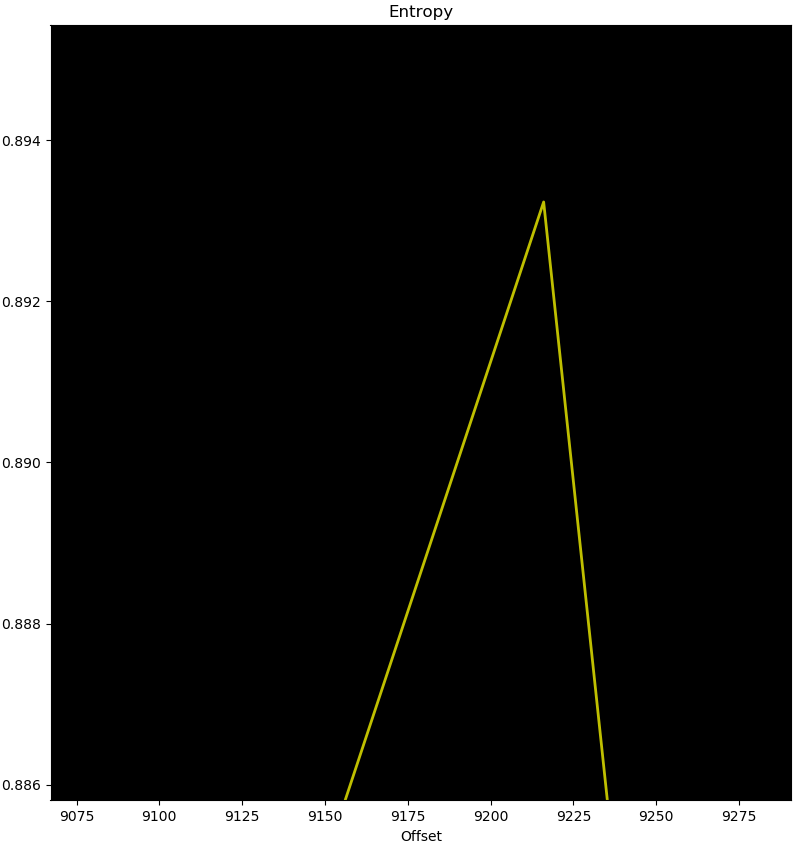 rodata’s entropy seems to be around 0.894; this is far not enough to qualify as random data. Though you probably already noticed that there were distingushable patterns in the sample. The NULL byte is very recurring, also the pattern 0006 appears four times, and 0c00 appears twice.

For instance, this is what the entropy of random data should look like: 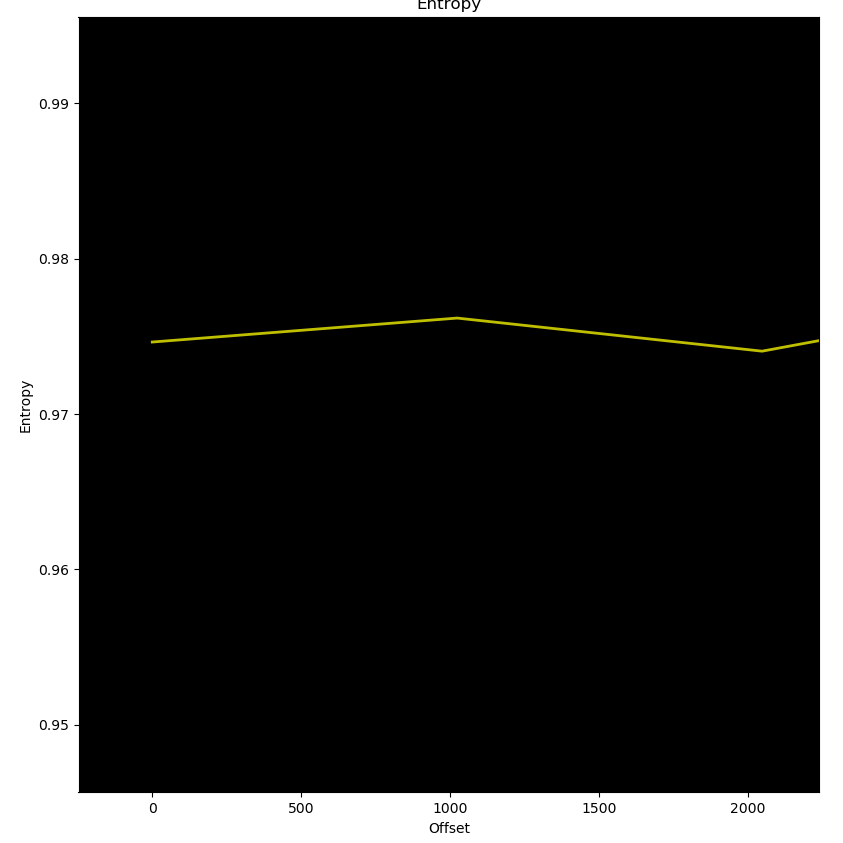 It’s slightly above 0.97, so there is a noticeable difference with the previous value.

Let’s quickly examine the main function of the binary: 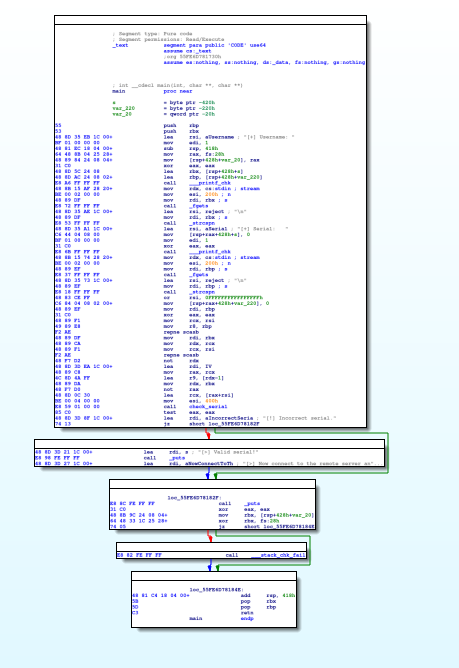 We can see a call to the function in charge of the serial’s validation, and then a conditional jump that will either print a valid response, or a negative one. There is no surprise here, we also can see those strings at the beginning of rodata.

The interesting point here is that, if there was no online check (and that is a likely scenario with proprietary software), getting a valid prompt is as trivial as replacing a 0x74 JZ with a 0x75 JNZ after the validation function returns. But we will address micropatching in another post.

So now, to the main part ! Let’s reverse this check_serial function.

OK I’m assuming that if you are still reading this it is because you are used to seeing horrible things in IDA (and I have come to learn since that this one is actually a nice one…).

Analyzing it’s parameters is going to help us understand what this is doing. It is taking the variable I named RO_DATA_ARRAY as an argument:

Guess who’s back ? It is indeed the segment we computed the entropy of earlier. RO_DATA_ARRAY is copied (0x400 bytes) in the bss (keep that in mind, it will make sense later). I will refer to the offset of RO_DATA_ARRAY’s copy in the bss by BSS_IR_ARRAY.

The main part of the validation function is actually a loop over all the values of this array, taken as dwords (4 bytes) and checking the value of the least significant byte. 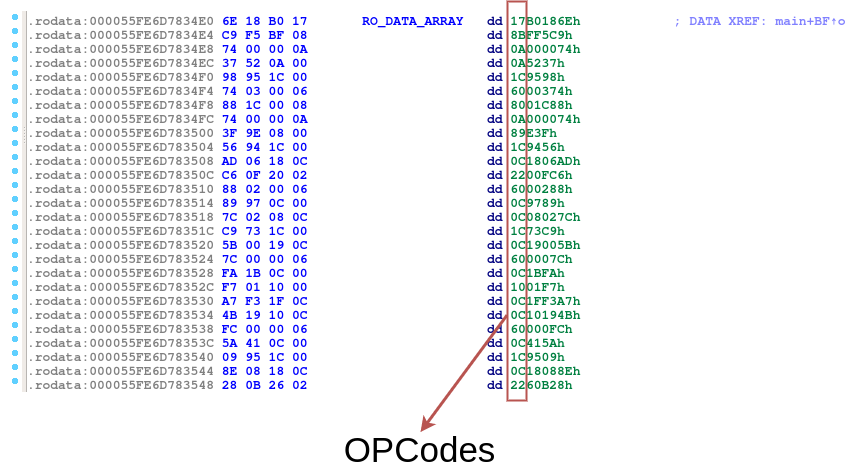 It is a 256 cases switch-case structure, and each different value for this byte will trigger a different code execution in the validation function. 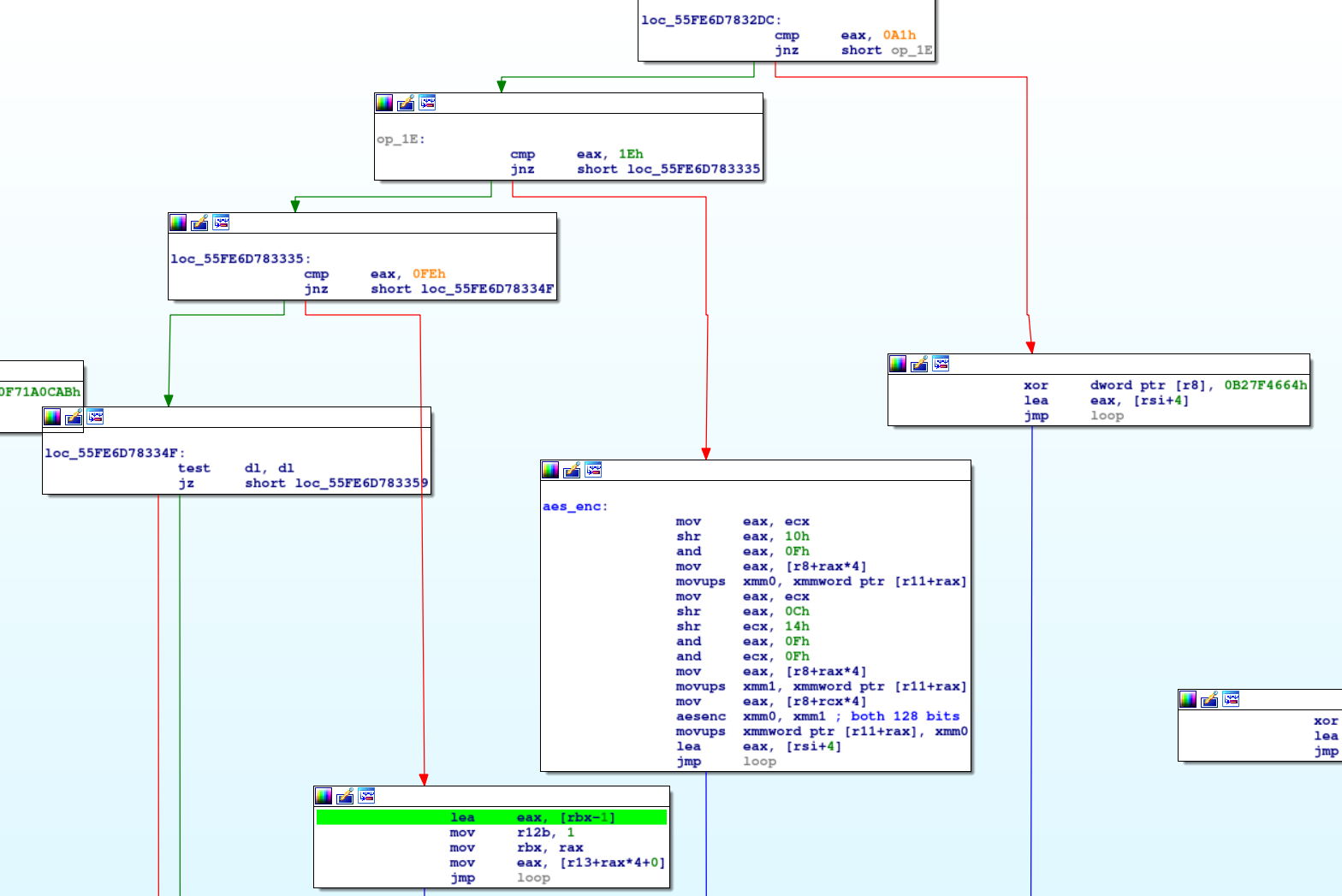 You are looking at a virtual processor, interpreting a custom byte code, also known as Intermediate Representation. The original code has been split in various basic blocks, and translated in another higher level code.

Let’s get a bit more into details:

Note the 4 branches that are put on the side by IDA, they have a very specific role: they are the only conditional jumps used by all the code. The code is somehow factorized, and that makes it a pain to place a breakpoint at a specific execution step.

Please accept my most sincere apologies as I can clearly not organize an IDA graph in a clean way. I know it looks terrible but it’s the best I had…

Here is the IR to x86 translation for the conditional jumps:

Studying the IR, we start spotting coding patterns, here is an example:

The value it is initialized with is 0x100, so we know our serial should be 256 bytes long. Also, I wont be detailing it here, but the loop next to this one is checking every char in the serial against the regexp [0-9a-fA-F]*. So the actual length of the serial is 0x80, as we are supposed to input an hex encoded value

Doing this we learn two important things about the virtual machine:

Regarding the IR syntax, I did not completely understand all the instructions (00 to FF) but here is an example of IR syntax: Some instructions are in the form:

Addresses resolved by parameters a and c are in the bss section. There is a reason for that:

The bss actually contains the stack of our virtual machine ! And the part right before the beginning of the stack is understood by IDA as a section containing 2 bytes values, they are our registers !

Also ro_data is supposed to contain the code, but why copy the code to the stack then ? The answer lies is the next level of obfuscation: the code is self-modifying, hence the write permission requirement. Here is an example of a code block that is XORed:

Right column contains the IR as it is in the ro_data segment, and left column is obtained after a XOR with 0xA1B2C3D4. So the opcodes d8, d4 etc are actually fake instructions sending you on a wrong path. They are dead code.

There are three steps of code XORing, pretty easily detectable once you were tricked by the first one, and after deobfuscating all the IR, here are the macro steps we obtain:

Let’s dig a bit deeper into the hashing function:

Here we can clearly see the syntax with the opcodes and parameters seen above: 0e is a multiplication, and the parameter c contains the value we multiply with. 13 is a xor with parameter c, and ff get the remainder of the euclidian division by parameter c. All those functions are applied to the value in the register in position 3 (value of parameter a).

This will compute the first 16 bytes line of the hash that will be derived in 5 other lines, totaling 96 bytes. I reimplemented the algorithm in python:

With a given username, you would obtain the same hash the binary computes using derived_key(transient_key(username)).

There is something pretty curious done at the end of this hashing algorithm. The binary copies the last two lines of the serial and appends them to the 96 bytes hash we just obtained. With an example input:

Here is a snapshot of the stack (bss but you get it) at the location that stores both the serial and the username’s hash: 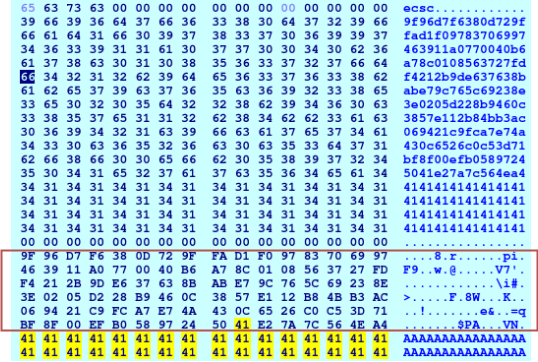 In the box is the result of the hashing algorithm. Highlighted in yellow you can see the two lines of ‘A’s that were hex decoded, and appended to the end of the serial.

You can already tell that this input is not exactly randomly chosen, and I’ll explain why it looks like this.

Part 4: Crypto - where the fun starts

The reason those last two lines are treated differently is because they actually are an implicit parameter; they are encryption keys.

Once this hash is computed, the code encrypts the serial using AES-NI instruction aesdec for several rounds, and checks, byte per byte, that the decryption result is equal to the hash. The basic block realizing the encryption is here: 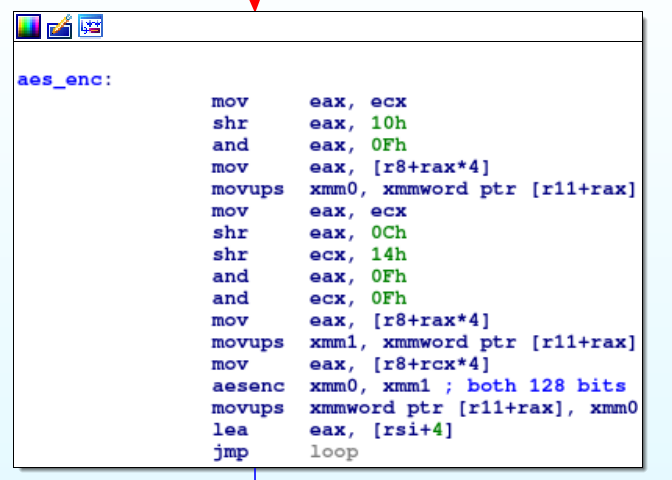 The xmm registers are 128 bits registers, so we are using AES 128. We will therefore name each 16 bytes line in the serial, as they will correspond to actual encryption blocks:

We are then looking for a serial verifying: serial == decrypt(hash, key)

Now the encryption algorithm itself is based on AES single round, but the block chaining is entirely custom, and uses circular shifts (hey you again). One round of this block encryption looks like this: 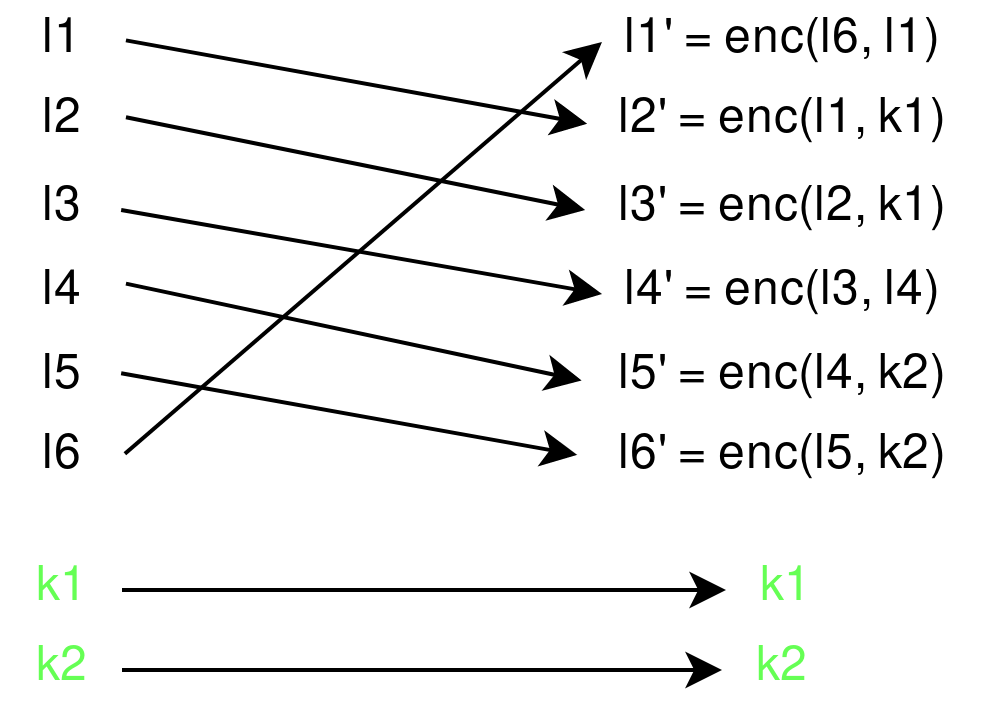 You can already guess that the order of decryption is going to be very important, as some round keys will be encrypted.

To test this, round by round, I have implemented a very simple x64 code (that will segfault but is meant to be debugged to get the register’s values):

Now, part of the problem is to implement, or find, an AES program that will allow you to encrypt or decrypt with single rounds of AES. You can’t do that with OpenSSL or PyCrypto as the number of rounds is standardized and depends on the key size (10 round for AES 128 in this case).

So obviously the inverse would be:

Using the inverse round, we implement what corresponds to: 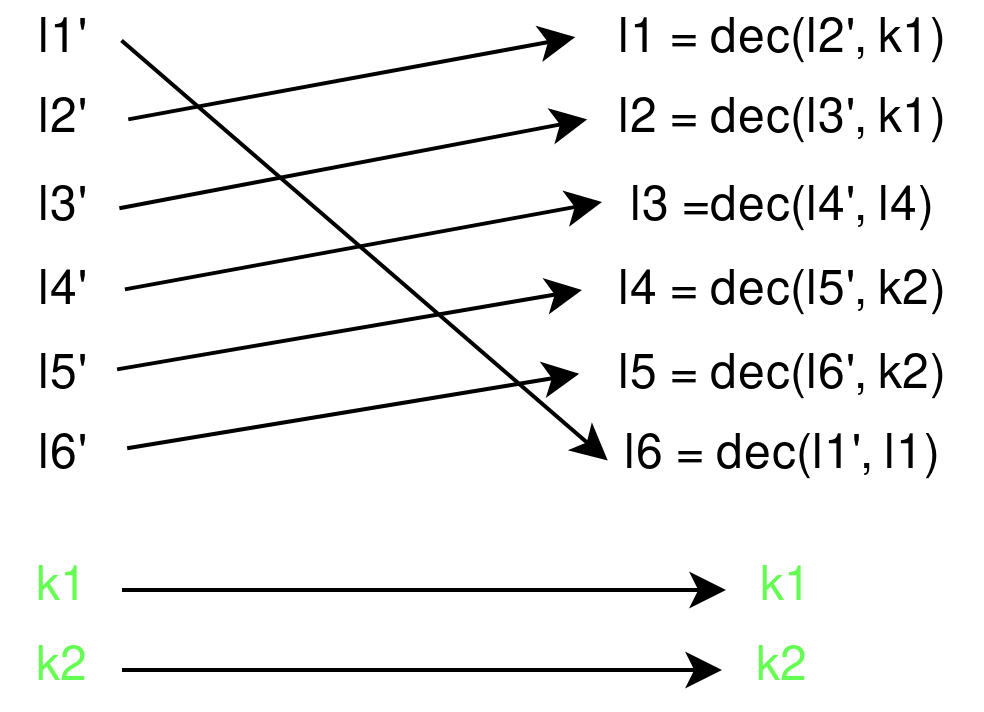 Bear in mind that this is one single round of block encryption, the custom chaining actually performs 32 rounds of it. But you get the idea.

It is very important to note here, that l6 cannot be decrypted before l1, as it needs the decrypted value of l1. The same goes for l3, that relies on l4. All the other lines are decrypted using k1 and k2.

Once we have this algorithm, our main keygen function should look like this:

Part 5: If you do it, be smarter than me

The alternatives that would have spared me a lot of time placing uncertain breakpoints are:

I didn’t try those methods, but people who used them definitely had quicker results, so I think about exploring them in further posts.

That’s it for today, I hope you enjoyed it.