NOTE: All encryption keys and passwords are fake ones made up for writing this post. 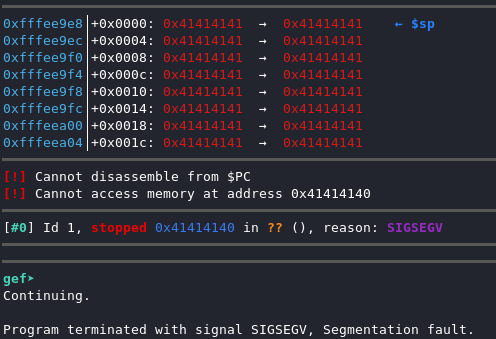 In the previous part we ended up downloading the full firmware unencrypted from the console connection. Now it’s time to show you what we have done with it.

The Filex protocol is the name of the proprietary protocol used on the USB Link port. The Windows tools shown in the previous part use the PVLink.dll shared library. It exposes several functions, and each one of them corresponds to a specific sequence of Filex messages. We can capture those Filex messages using USBPcap: 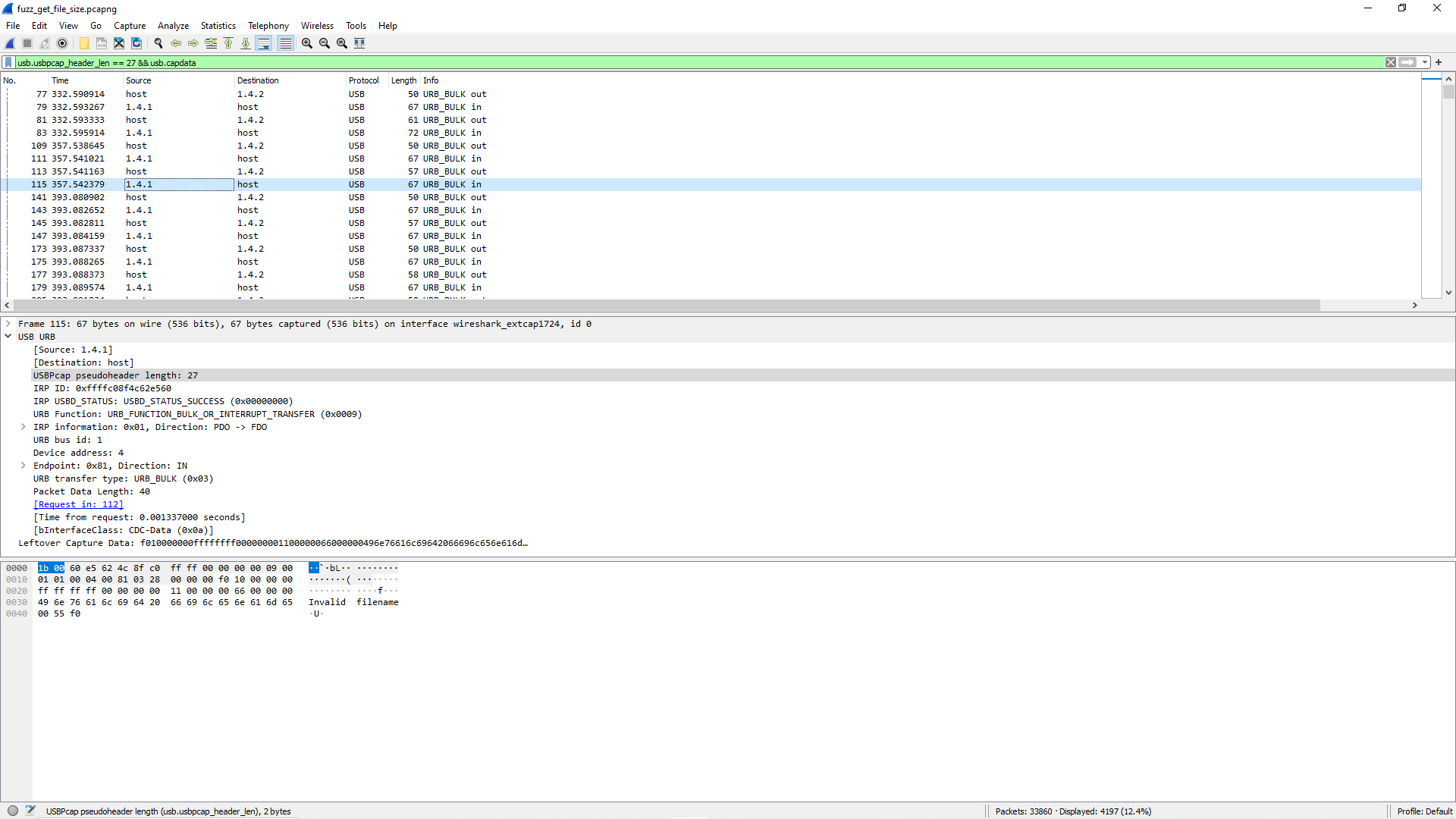 In the DLL PVLink.dll, we can list the functions responsible for sending those messages: 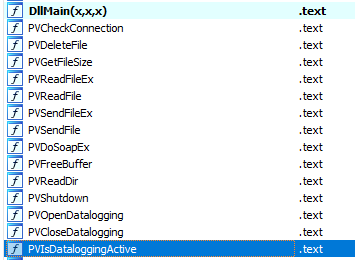 We had to chose a candidate for scouting, so we started focusing the PVReadFile function.

Here is the PVReadFile prototype:

The filepath has to be a string in the form: folder:file name, and the mode integer has probably nothing to do with an actual reading mode (r, w), we just suspected it was linked and hardcoded it to the same value we had seen in the Wireshark captures.

This function uses the following sequence of Filex messages:

(NB: the complete list of available functions is in part 2.1)

We tried fuzzing both the folder and the filename with different attack patterns (directory traversal, encodings…) until we experienced an interesting thing. The device would crash if the file name parameter, second part of the filepath parameter, contains more than 171 characters. We were hunting for a buffer overflow, and we definitely found one.

We had a crash, now we needed to know if it was exploitable. Hopefully we can reverse the firmware we obtained previously. The root of the SIGSEGV is found in a function named CLEAN_PATH, which, ironically enough, was made to restrain unauthorized file system access, and hence help secure the device.

It checks for ‘\’, ‘/’ and ‘..’ patterns and stops if it encounters any of those It then compares the folder name (the string before the ‘:’) against a white list of authorized folders:

We can see conditional jumps looking for the characters:

and then break if the strings contain any of these. This is not a web application, so HTML, Base64, or any king of encoding will be taken as a raw string.
Subsequently, it copies the folder name and file name in local variables using strcpy:

This if checks for the length of the folder name, which is supposed to be under 16 bytes, so it is protected. However, the second strcpy does not check the length of the file name! And according to Ghidra’s stack frame, there is 127 bytes for the file name’s buffer. The buffer overflow occurs here.
So now we need to get debugging in order to see if we can exploit this.

At first we tried to run a GDB shell directly on the PowerVision device. Since it is a kernel in version 2.6.36, finding a statically precompiled GDB that wont return a

error message is nearly impossible. We thought of running an Ubuntu ARM 2.6.36 and compile GDB statically ourselves but it seemed longer. Instead, we went for firmware emulation.

In the previous part, we downloaded the firmware through the UBI blocks using the recovery shell. The directories structure above is a subset of files found in the readonly part of the firmware. The two most important binary files are filex-server-arm, which mostly handles the filex protocol over USB Link, and BobcatApp-arm that contains all the Dynojet logic for bike tunes, licenses and logs.

We ran the Linux hardening-check tool on our firmware binaries:

We used the following command line to locally run the filex-server-arm binary:

Gdb-server listens on localhost:1234, the directory squashfs-root/lib contains all the required shared object libraries, and we know which arguments are expected from reversing the main function.

Now that the ARM binary is running in the background, we can debug it using gdb-multiarch. The process will read Filex messages from /dev/ttyGS0, so we created a named pipe using:

And while being debugged in GDB, we can shoot our previously crafted packets of 171+ bytes:

Here is a quick exploit code:

So the first 171 bytes are for reaching the PC register, then we can write our 32 bit pointer in the next slots. The total payload is 175 bytes.

We can clearly see that we control the Program Counter register, which means we can change the execution flow to do something better than a SIGSEGV.
Yet we encounter one last problem: there is a charset verification on what goes in the filename buffer. If a char’s value is not contained between 0x20 and 0x7F, the function will enter an error case and the buffer will not be copied, which is a shame because we have the perfect candidate for a pointer: the CFILE_DO_COMMAND function! (see part 2.1) The problem is that its address contains hex values above 0x7F and even the stack is loaded at addresses that can’t be written in the buffer.

1.2.2 - Difficulty to exploit the Buffer Overflow

While the buffer overflow exists, we did not identify a way to execute code from it yet. We are open to suggestions if you have any ideas, feel free to submit them to us via our Discord: https://discord.gg/eTnPNTuCTZ

So far, we have tried:

Part 2: Focus on the Filex Protocol

Earlier we mentioned the Filex protocol as the underlying logic behind the PVLink.dll functions. We needed to know more about it. Specifically, which kind of operations were available. I’m insiting on that part, as experience has shown me that when an API or service exposes several types of operations, it is not uncommon to find:

We were now hunting for one of those. So let’s continue with the protocol reverse engineering!

We notice the delimiters (0xF0) and some kind of headers in little-endian.

Here, in another example, we can see a different function. This one is systematically called prior to any read, as it returns the file’s size, which is used for the actual read function.

After a few captures Wireshark, we started understanding the structure of the binary messages. Here is the parsing of the DELETE-FILE message: 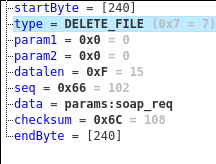 The Kaitai Struct is quite simple, there is no nested data.

The only thing we now need to forge packets is the algorithm to generate valid checksums, otherwise they will be rejected by the filex-server. We don’t need the firmware for this as the PVLink.dll is himself able to forge correct packets. 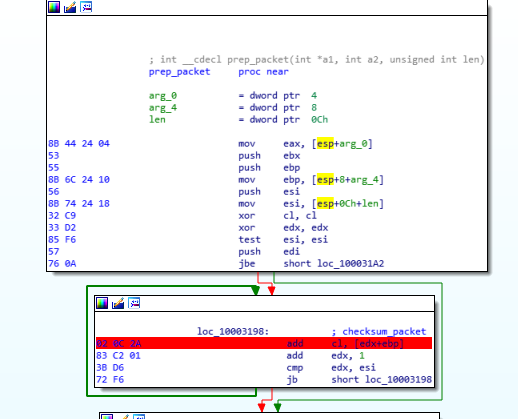 The algorithm is quite simple:

Let’s get to packet forging!

That’s good for us. It’s quite common to see developer features left in products like this. Often the devs need a quick shell access for debugging purposes. But after many attempts, I did not succeed in executing any command. Something was off. Months later when I got my hands on the firmware, I was then able to reverse the function supposed to execute the shell command:

What do you mean, TODO???
It seems that the function is actually implemented as we can see a call to system without any cross-reference:

My guess would be they never changed the log message containing the TODO, but the CFILE_DO_COMMAND exists in the code. They probably just removed its call from the release version.

We had reached our goal, which was mapping all the possible Filex messages!

We tried to map the file system using the functions directly availble in the DLL. (This is a blackbox approach we had to use before being able to get the firmware). The good thing with DLL’s is that they export symbols even if they are stripped.

We used the PVReadDir function to browse available directories:

The prototype is very similar to the one of PVReadFile we used earlier. However, it is a bit harder to read from it’s result as we have to reverse engineer the returned structure. Here is the code that enumerates directories using a wordlist and PVReadDir:

Nothing exotic here, we just:

We can do the same thing more simply with Python:

This fuzzing/bruteforcing gave us interesting information, we discovered the following directories:

The most interesting here would be the updates folder, as it contains something we have been eagerly looking for: the licenses folder. The problem is that with the Filex protocol, it is impossible to read in nested folders, and the files we want can only be read using the pattern: updates:licenses:license_file.txt. However, in the next part, we show how we obtained a pretty good way to be able to read wherever we want.

Since we can get the /etc/shadow file, we ran hashcat to get the root password of the device:

After trying the whole rockyou.txt without any success, we tried with different mask attacks, and got one very interesting result: we found a matching password that was only a few lowercase letters. Considering the amount of protections in place we were was quite surprised to find a matching root password so easily. Maybe it is an MD5 collision?
Anyways thanks to this, we don’t have to go through the whole U-Boot/Recovery mode process to get a shell. Now we can connect directly using the internal UART Debug port:

After getting the root shell, we wanted to find our holy grail: the PVU_FILE encryption password. Grepping for OpenSSL calls in the squashfs-root, we found the following function in the Bobcat-app-arm binary: 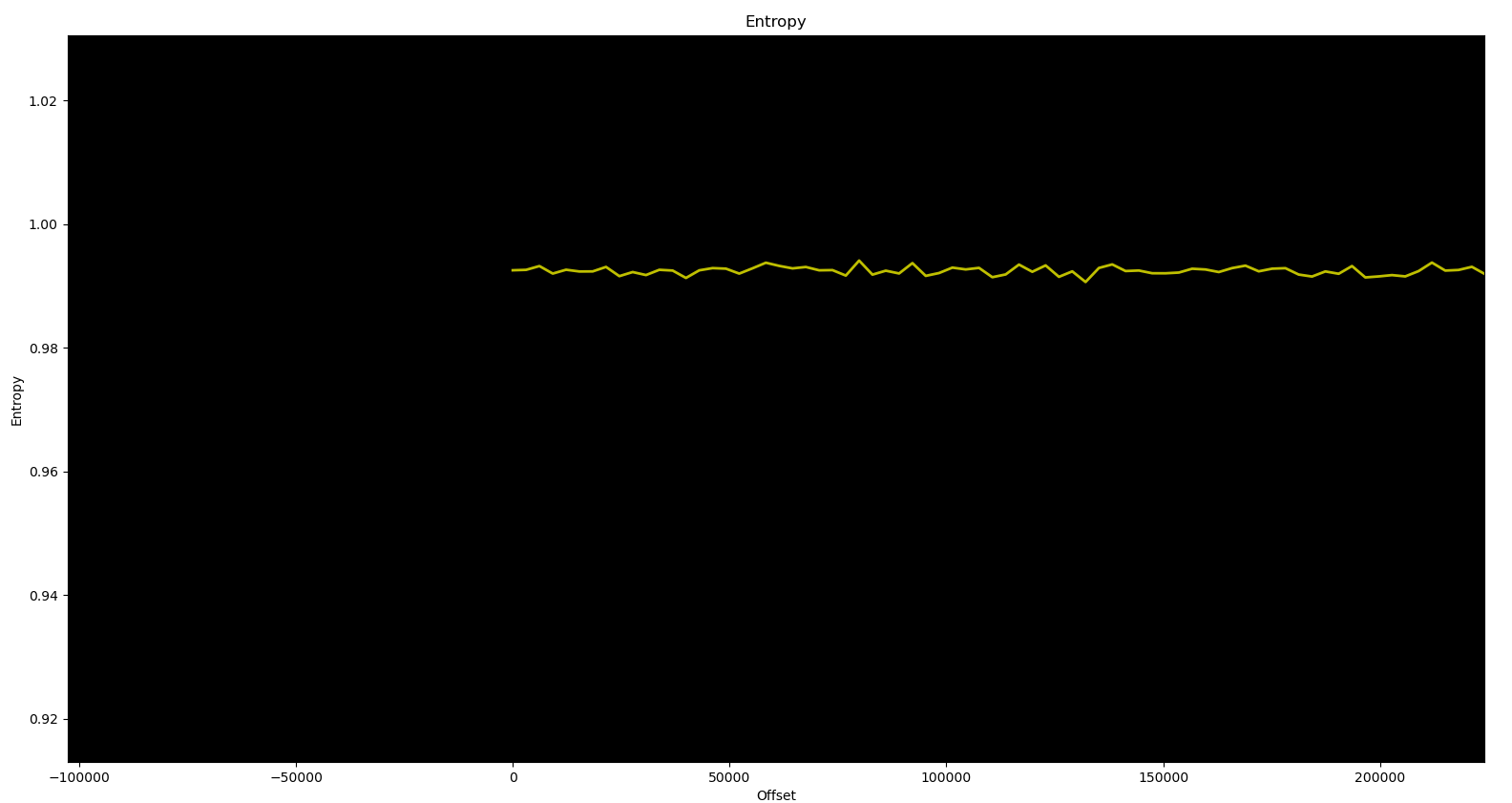 Well those files look encrypted. But instead of playing cat and mouse with crypto keys, this time we had luck. The ubifs part of the firmware (read/write) contains log files:

Nice! We found the holy grail. I wondered what was the point of going through that many obfuscation layers to eventually just leave the encryptions keys in plaintext in the log files…
Well, those log files are supposed to be encrypted:

The function generates a password with various sums, subtractions, and permutations. Finding the password here is just a matter of minutes, and so would be decrypting the log files. The obfuscation is quite weak. But that’s not the best part. The original log files are not deleted after being encrypted. Which is probably the reason why we can find the firmware updates encryption keys in plaintext.

We had a lot of fun doing this but we would like to explore a few more mysterious things before calling it a day:

It was a long post, thanks for staying until the end and stay classy netsecurios!